The plot of Constellations is as old as the stars.  Boy and girl meet, break-up, reunite, and then, sadly, tragedy.  There’s a unique twist, however, to the story as it moves forward.  Instead of heading in a linear direction with one trajectory there are numerous threads to the narrative that are explored.  For instance, the opening scene between Marianne (Allison Pistorius), a cosmologist and Roland (M. Scott McLean), a beekeeper is portrayed multiple ways.  The actors start and then restart the action with slight variations before the next scene begins, reconfigured with alternative pathways. 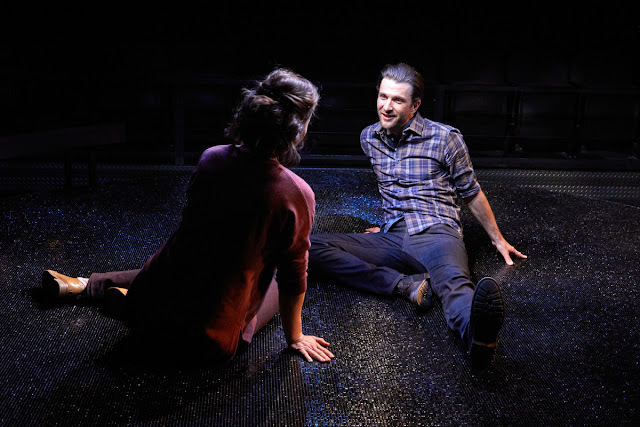 The idea of a world with potentially limitless perspectives is teased out by playwright Nick Payne.  During the early days of their relationship Marianne attempts to explain her work as a physicist studying the origins of the universe, which could also include the notion of parallel universes.  The start and stop nature of the production, as the characters in this two-person show continue to move forward with their lives together, genuinely works.  At times, though, this 75-minute play becomes somewhat tedious with the back and forth but, overall, the imagination and originality of the show, coupled with the rapport between the characters, makes Constellations a winning production. 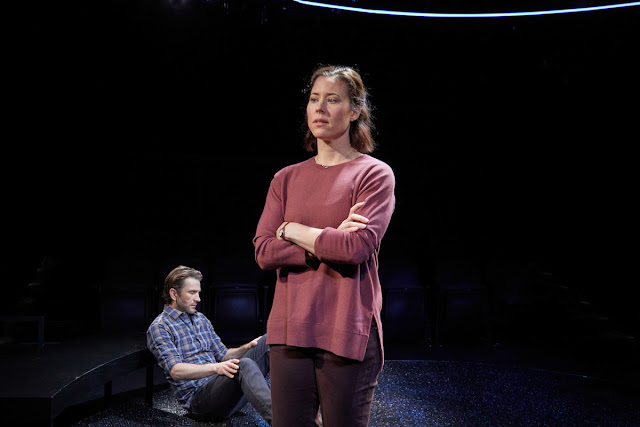 The two performers bring a simplicity and complexity to their roles.  M. Scott McLean, who was so good in Midsummer a few seasons back at Theaterworks, once again displays his prowess for playing quirky, appealing characters.  He finely displays a wide-range of personality traits, sometimes calling forth many within a very short time period as a scene is replayed a number of times.  Allison Pistorius is an engaging actress that can be affable one moment, sentimental the next, passionate or just a jerk.

The difficulty for Rob Ruggiero, one of the most skilled and versatile directors in Connecticut, is how to take two people talking on a small circular stage and create an absorbing and intriguing production.  To complicate matters, the mini-scenes are constantly repeated so there needs to be the slightest nuance or twist at every variation to keep the audience involved and caring about the characters.  Fortunately, Ruggiero has enough savvy and artistry to forge a successful, enticing, and bittersweet comedy-drama come to life. 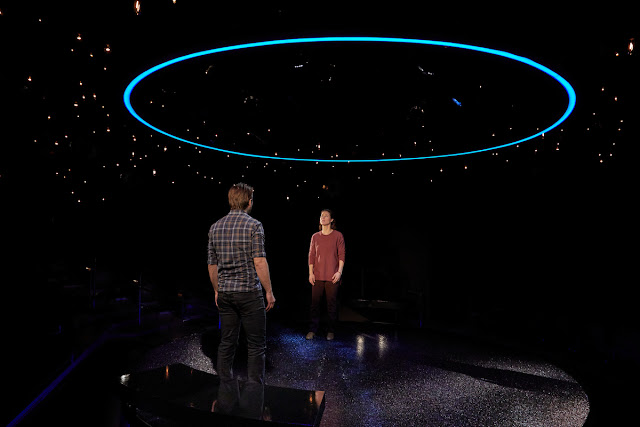 The set design by Jean Kim, a theater-in-the-round space that emulates a planetarium configuration, and Philip S. Rosenberg’s lighting design, consisting of small bulbs twinkling above the stage and reacting to the emotions below, helps set the mood for the play.  Michael Miceli’s inventive sound design and Billy Bivona’s original music augment the atmospheric nature of the show.

Constellations, a beguiling and wily take on two people navigating the landscape of love.
Posted by StudentAffairs.com at 4:32 PM