Review of "The Comedy of Errors"

The Hartford Stage production of the Bard’s The Comedy of Errors is one lively, madcap, and eye-popping theatrical affair.  There are many non-Shakespearean elements dropped into the play including an homage to Bollywood musicals, some soft shoe routines, and a bubbly beach blanket movie number.

Audiences are greeted to this farcical comedy with an intoxicating set design inspired by the cliff-top towns of the Greek island of Santorini.  A small dock, with two anchored boats, completes the picture.  As the show unfolds accordion and bouzouki playing actors accompany actress Paula Leggett Chase in an extended rendition of the song “Never on Sunday,” further setting up the Hellenic tone and mood of the show. After this ten minute prelude the jocularity begins.

The Comedy of Errors, one of Shakespeare’s shortest works, revolves around two sets of twins separated at birth and, unbeknownst to each pair, find themselves in the same city on the same day sparking mistaken identities and bedevilment for the citizens of the city of Ephesus. 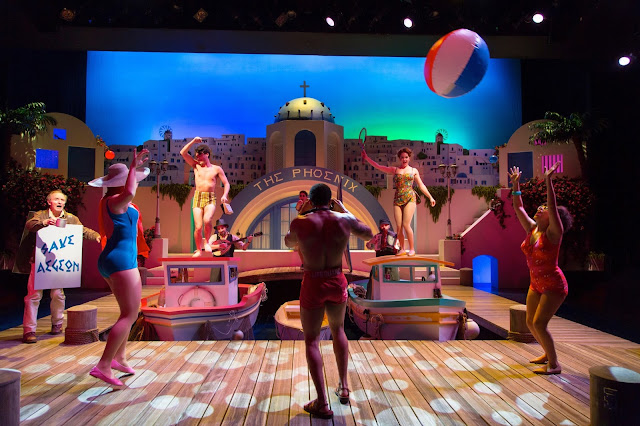 The large cast is game for the intoxicating pace of the play as they scamper about the stage, romp through open portals, and engage in boisterous and slapstick shenanigans.

Darko Tresnjak directs with a controlled frenzy.  He has added unique elements that, along with his creative team, make the production a visual feast.  There is so much going on that even the casual Shakespeare fan will be entertained.  The frantic pacing can sometimes get in the way of the dialogue, but the thespians do splendidly getting about their job in between all the wild diversions.
Choreographer Peggy Hickey might be having the most fun as she incorporates many styles of dance, both for just a few cast members as well as the entire company.  The Bollywood inspired number is especially spirited and energizing.

Some of the real stars of The Comedy of Errors are the creative crew.  Foremost is Darko Tresnjak, whose set design is a wonder and feast for the eyes.  The numerous costumes crafted by Fabio Toblini are playful with many being brightly colored confections.  Matthew Richards’ lighting design and Jane Shaw’s sound construction magnify and enhance the onstage antics.

The Comedy of Errors, a zany and diverting production, playing through February 12th at Hartford Stage.

Posted by StudentAffairs.com at 2:20 PM No comments:


Last year I heard about the creation of BroadwayCon—based on the hugely successful ComicCon in San Diego, which highlights comics, science fiction and where movie studios and Hollywood and television stars come out in force to promote their upcoming events.  Even though the first BroadwayCon coincided with one of New York City’s largest snowstorms of the season, the proceedings were successful enough to produce a 2017 version with the hope of making it a yearly pilgrimage for theater aficionados and fans.

This year, now ensconced at the immense Jacob Javits Convention Center on the far West Side of Manhattan, through Sunday, January 29, 2017, BroadwayCon is bigger and better.  Press representative Tori Bryan said they were expecting up to 5,000 people a day.  So, what exactly happens at BroadwayCon?

BroadwayCon is a mash-up of lectures, panel presentations, Q and A sessions with Broadway actors and actresses, performances, sing-along’s, nighttime concerts, dance parties, and a marketplace with dozens of vendors and companies selling and promoting their wares.  There are even autograph sessions with such theater luminaries as Donna Murphy, Joel Grey, and Chita Rivera.  In short, BroadwayCon is a three-day smorgasbord of activities that would satiate any theater enthusiast.  In short, according to its organizers, “it is a chance to get the complete Broadway fan experience, from every angle…and to celebrate the shows they love with people who bring them to life.”

As a self-proclaimed theater geek, I arrived early Friday morning to immerse myself with the enthusiasts, some dressed as characters from such current Broadway hits as Elphaba from Wicked and the women from Waitress.  I was more interested in attending the historical and creative panel presentations then the other fan-based activities.  In the morning a diverse group of stage managers talked abut their craft.  The individuals--Matthew Aaron Stern, Marybeth Abel, Narda Alcorn, Matt DiCarlo, and Christ Ney--

The exploration of relationships, ever-changing and pulsating, is the focus of the taut, sometimes explosive drama, Sunset Baby, playing at Theaterworks through February 19th.

Playwright Dominique Morisseau introduces three characters.  Nina (Brittany Bellizeare) is a low level street hustler who, along with her male companion/lover and handler, Damon (Carlton Byrd), plies the streets of New York eking out a tenuous existence.  They come across as two soulless individuals, existing day-to-day.  That suddenly changes when Nina’s father Tony (Todd Kenyatta), a former Black Panther type activist, suddenly enters her life after many, many years fighting for social equality and other causes and also serving time in jail.  He wants to locate letters his wife, Nina’s mother, left to her daughter after her death.  They are worth, potentially, many of thousands of dollars because of her prominence in the movement.  That sparks conflict between the young woman and Damon as well as dredges up years of pent-up emotions and rage towards her father before an unexpected resolution involving the threesome is revealed.

Ms. Morrisseau’s drama presents a slice of realism.  The dialogue is strong and feels authentic.  However, the back-story of each character is sketchy and perplexingly incomplete, which gives the audience pause as to each character’s true motivations.  The real focus of the show, even after the introduction of Nina’s long missing parent, takes time to coalesce.  Themes of family and commitment swirl around the production, but they are uneasily pushed aside towards the end as the trajectory of the play suddenly changes to Nina’s resurrection as a determined, purposeful and independent woman.

The cast is compelling and show total commitment to their characters. Todd Kenyatta gives Tony a thoughtful and weighty demeanor.  He is reflective, yet determined.  The actor’s hardened gaze and discourse elevate a purposeful demeanor.  Brittany Bellizeare presents Nina as an emotionally battered woman with numerous unresolved issues and aspirations.  She is strong and feisty, not necessarily comfortable in her own skin.  The numerous costume changes she manages throughout the play could act as a metaphor for her desire to constantly try to reinvent herself.  While the actress demonstrates steely grit, a degree of tenderness or vulnerability would have strengthened and humanized her portrayal.
Carlton Byrd imbues Damon with both rage and lovingness.  Street savvy and book smart, he exudes an arrogant self-pride that, in the end, makes him irrelevant and disposable.

Director Reginald L. Douglas brings an edginess to the production.  At times the atmosphere can be tense and confrontational.  The fervor is amplified by shouting and accusations, which works for most of the scenes, but is occasionally relied on too heavily.  Crafting a three-person drama on a small, one set stage can be challenging but, for the most part, Mr. Douglas deftly manages the task.  His insertion of Tony’s plaintive, dimly lit soliloquies, at key junctures of the show, is, at first, baffling and inscrutable until the show’s conclusion.  It is only then we realize the purpose and poignancy of the solemn, matter-of-factly delivered verse.

Sunset Baby, a fitful, but satisfying drama through February 19th.
Posted by StudentAffairs.com at 9:59 PM No comments:

Review of [title of show]

The show Dear Evan Hansen is an electrifying, captivating new musical with an emotionally powerful and praiseworthy performance by Ben Platt in the lead role.

Evan Hansen is an extremely anxious high school student, on medication and seeing a therapist for his sometimes debilitating condition.  He has no friends and, for all intents and purposes, is invisible to his peers.  He is alone, until a classmate commits suicide. Through an escalating series of lies, fueled by unceasing and insatiable social media networks, his stature and presence begin to change with unanticipated and distressing results.

The book by Steven Levenson is an emotional rollercoaster of impassioned scenes and straightforward honesty that connects to today’s teenagers.  The story can sometimes be agonizing to watch as the characters try to negotiate the new landscape that is developing, changing, and spiraling out of control all at once.  But Dear Evan Hansen is not just about angst and crisis.  It also focuses on the a multitude of relationships that are spawned and changed from the events on stage.
The score by Benj Pasek and Justin Paul is heartfelt with penetrating lyrics that explore the inner turmoil Evan is going through as he confronts a new reality.  The songs can be raucous with an in-your-face impact.  They are playful, with a serious undertone.  And there are tender ballads that reach to the depths of the character’s souls as well as reveal the agony individuals feel upon the death of a son.
The cast, led by Ben Platt, is impressive, imbuing their characters with an intensity and delicacy that can be poignant as well as somber.  Platt is the anchor.  He is almost always on stage and singing the majority of the score.  From his first entrance on stage, with nervous tics and darting eyes, you realize this is a young man that has fully taken his acting prowess to a heightened level.  He is believable and authentic.  The other members of the acting troupe include Laura Dreyfus as the sister of the deceased student, Zoe Murphy, and the one who Evan pines for.  The young actress deftly projects a lost innocence and whirlwind of emotions as she tries to make sense of the sudden change in her family dynamics and personal life.  Rachel Bay Jones, as Evan’s mother Heidi, aptly portrays a mother frustrated and panicked over a son she cannot reach.  Jennifer Laura Thompson is superb as Cynthia Murphy, mother of the departed son.  Her grief and confusion strikes a chord with the audience.  Your body quivers with compassionate understanding as she pleas for any scrap of information about her enigmatic boy.  Michael Park as the father, Larry Murphy, gives a finely etched portrait of a man aloof, at first, over the death of his son, who gradually begins to wrestle with his feelings, as he tries to come to grips with the sudden shake-up in his life.  Mike Faist as Connor Murphy, the high school student who suddenly dies, gives a nicely layered performance in life and death. Will Roland as Evan’s “relationship friend,” Jared Kleinman, provides a good dose of comic relief to off-set the weighty mood of the show.  Kristolyn Lloyd as high school classmate, Alana Beck, gives an understated and compelling performance.  She is not unlike Evan Hansen in her anxiety and timidity.
Director Michael Greif, who has sensitively helmed other musicals with dysfunctional characters such as Next to Normal and Grey Gardens, skillfully guides the production from its inauspicious beginnings through to its cathartic ending.  He smartly keeps Ben Platt center stage—aching and trying to find his pathway through the storm he has unleashed--with the other characters swirling around his nexus.  Greif artfully incorporates the social media maelstrom through pulsating, ever-changing screens.  He also intelligently allows the material to unfold naturally without calling undue attention to the series of events that are unfurling onstage.

The creative team of scenic designer David Korins, Projection Designer Peter Nigrini, Lighting Designer Japhy Weideman and Sound Designer Nevin Steinberg show their expertise and presentation skills during scenes where the stage of the Music Box theater is transformed into a hive of activity with screens projecting social media buzz, lights and sound amplifying the dramatic tension.
Dear Evan Hansen, a gripping, dazzling new musical that speaks openly and directly to the culture of today.
Posted by StudentAffairs.com at 7:18 AM No comments: