The world premiere of the musical, Waitress, based on the 2007 film of the same name, can best be described as a work in progress.  There are many aspects of the production to cheer about, primarily the engaging and fresh score by pop artist Sara Bareilles.  The acting corps, led by Jessie Mueller in her first role since winning the Tony Award for Best Actress in a musical for Beautiful – The Carole King Musical, is wonderfully appealing.  The problem is the book by Jessie Nelson.  It is disjointed and doesn’t fully flesh out the central characters.  If its issues can be solved before the Spring 2016 move to Broadway then Waitress could have a secure future.

The story revolves around three waitresses at the Joe’s Pie Diner.  Jenna (Jessie Mueller), is a pie-making whiz and in a dead-end marriage.  Becky (Keala Settle), is boisterous and never lacking for a wisecrack.  Dawn (Jeanna De Waal), is shy, slightly gawky and single.  Their boss and short order cook Cal (Eric Anderson) is, on the surface, unappreciative of their hard-working lives, but underneath really does care for his trio of bustling servers (Think of the characters in the 1970’s sitcom, Alice, or the movie the TV show is based on, Alice Doesn’t Live Here Anymore).  The focus is on Jenna, depressed and unhappy with her dispiriting life.  She soon finds out she is pregnant with her intimidating, slacker husband Earl’s (Joe Tippett) baby and begins an improbable affair with her doctor (Drew Gehling).  Will she jettison Earl?  Run off with the married physician?  Enter the pie-baking contest, which could change her life forever?  What about the lives of her waitress colleagues?  These are just some of the storylines explored in the musical.

Some of the dramatic threads are more successful then others, which keeps the show from truly becoming a captivating production.  The creative team needs to make decisions to strengthen the book even if they might run counter to the plot lines within the movie.  For example, Jenna’s relationship with her doctor, which sputters by the musicals end, should have a more satisfying resolution.  There is also too much emphasis placed on Dawn and her elfin-like boyfriend and the back story of all the central characters, except Jenna, needs further clarification either in exposition or song.

The one constant is the score by Sara Bareilles, her first for the musical theater.  It is contemporary, lively and bright.  She has designed lovely, overlapping harmonies that beautifully meld her popular songwriting appeal with traditional Broadway song structures.  Some of the unique instrumentation choices and a cappella elements are thoroughly refreshing.

Jessie Mueller leads the strong group of actors.  She is vulnerable, full of grit and determined to succeed on her own terms.  Her lovely singing voice conveys her pain as well as her triumphs.  Her waitressing partners, Keala Settle and Jeanna De Waal, give finely honed performances, but are limited by the cursory dynamics of their character’s narrative.  The audience craves more details of their lives.  This is the same issue with Eric Anderson and Joe Tippett’s roles, as Cal and Earl respectively.  For Joe Tippett’s Dr. Pomatter there is more to grab hold of, but we don’t know the reason for his choices nor what motives him.  Can these issues be rectified?  They should be able to be solved, which would make the production richer and more fulfilling.

Director Diane Paulus has complete command of the show, which wavers from the full rambunctious glory of scenes in the diner to nerve rattling menace between Jenna’s encounters with husband Earl.  The overall tone of the musical, however, is not clearly defined.  Sometimes a laugh-out-loud comedy and at other points a tired melodrama, the production would be better focused with a more cohesive approach.

Waitress, now at the American Repetory Theater in Cambridge, MA through September 27th.

Posted by StudentAffairs.com at 6:38 PM No comments:

Review of "Murder for Two"

Adapted from my Off-Broadway review of the show.

Happily, all three are embodied in the very funny, ingeniously written, and energetically performed two person show, Murder for Two, playing at the Long Wharf Theatre in New Haven through August 30th. 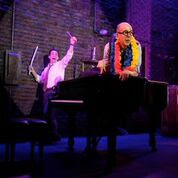 All the action takes place on a small stage with the only accouterments being a baby grand piano, a few props, and one’s imagination.  As with many whodunits the story begins in a large, hilltop mansion where the wife of author Arthur Whitney is throwing him a surprise birthday party.  Unfortunately for the book writer when he arrives inside the darkened structure a gun is fired, fatally killing him.  Who fired the fateful shot?  There is a house full of suspects—each one nimbly and uproariously portrayed by Kyle Branzel—everyone one of them with solid motives.  Enter would-be detective Marcus Moscowicz, played with equal comic dexterity by Ian Lowe, who methodically, or maybe more accidentally, happens upon the multitude of clues and red herrings to eventually solve the case.

The two actors have a finely honed chemistry that translates into unbridled zaniness and semi-controlled madness.  Kyle Branzel sometimes seems possessed as he ricochets from one character to another making each one as believable as the next. Ian Lowe has only one character to focus on but, nonetheless, needs all his comedic acting prowess to stay in sync with his tall, lanky partner.

The score, by Joe Kinosian, who also wrote the amusing and clever book of the show, and Kellen Blair, is quick-witted and tuneful.  It would be interesting to hear fully orchestrated versions of each tune.  All the songs are performed by Branzel and Lowe, who also demonstrate their considerable musicianship by accompanying each other on the on-stage piano.

Director Scott Schwartz expertly guides the two thespians through the fast-paced production, coming up with enough shtick and sidesplitting shenanigans for two shows.

Posted by StudentAffairs.com at 8:16 PM No comments:

Memphis, the 2010 Tony Award winning Best Musical, now playing at the Ivoryton Playhouse through August 30th, is lively and entertaining.  While there are deficiencies in the show, the passion and enthusiasm of the performers helps gloss them over, providing an overall winning production.

The musical takes place in Memphis during the 1950’s.  Racial segregation is the norm, especially in the music industry.  Huey Calhoun (Carson Higgins), a white man, undereducated and a self-proclaimed redneck, nevertheless embraces the world of rhythm and blues.   He frequents a club run by a black entrepreneur, Delray (Teren Carter), and is enamored with the owner’s beautiful and talented sister Felicia (Renee Jackson), the in-house singer.  He vows to take his love of soul music to the masses and soon has turned a stodgy, white music only radio station upside down and created a musical sensation.  He continues to break down barriers and agitate the status quo as his popularity in the southern city soars.  But the south, at this time in our history, was not a forgiving place.  Racial harmony was absent and the love of a white man and black woman could cause painful, tragic and heartbreaking results.  These consequences are all played out throughout the show as characters evolve, times begin to change and life moves on.

The score by Joe DiPietro and David Bryan, of the rock group Bon Jovi, is full of energy and exhilaration.  They are conveyed with a vitality and urgency worthy of this dawning of rock ‘n roll. Unlike many recent Broadway musicals there are a number of songs that stay with you long after you leave the theater.  Standouts include “The Music of My Soul,” “Someday,” “Stand Up,” and “Steal Your Rock ‘n Roll.”

The cast is uniformly good.  They are led by Carson Higgins as Huey Calhoun.  He has invested a passion and earnestness into his role that makes his character believable and sympathetic.  Renee Jackson, while a fine actress, doesn’t infuse Felicia with enough conviction and hunger.  If she had a more powerful singing voice to belt out her musical numbers, her performance would have reached the higher level necessary for the role.

Notable among the supporting performers are Melodie Wolford as Huey’s mother, Gladys.  At first she brought little depth to her role, but slowly becomes more multi-dimensional culminating in her song, “Change Don’t Come Easy.”  Jamal Shuriah has a quiet intensity as Gator, a nightclub worker who does not speak.  But by the end of Act I his gospel-inflected outpouring had the audience applauding.  David Robbins’ Bobby, a denizen of Delray’s and confidante to Huey, is a bear of a man with a pleasing voice and sweet moves on the dance floor.

Joe DiPietro’s book for the show resonates in today’s society as race relations are questioned and examined across the media.  He successfully portrays a time in America that underwent a significant cultural transformation.  The libretto is fast-paced and effectively addresses the triumphs and adversities of the characters.  The show can pack an emotional wallop since we grow to care about the players and want them to succeed.

Director/choreographer Todd Underwood has delivered a rousing production, which, unfortunately, can be uneven at times.  For example, the relationship between Huey and Felicia, which should be one of the key features of the show, generates few sparks.  Most of the large dance numbers need to be more polished.  Yet, even with these drawbacks, he keeps the action moving through the many scene changes on the small stage and builds the musical to a satisfying climax.

Memphis, a spirited, summer ending musical at the Ivoryton Playhouse through August 30th.
Posted by StudentAffairs.com at 9:49 AM No comments:

Review of "I'll Eat You Last"

Sue Mengers was the Hollywood “superagent” to the stars.  In her long career she represented such A-List talent as Barbra Streisand, Gene Hackman, Burt Reynolds, Faye Dunaway and many more.  Her reminisces are the substance for the wisp of a show, I’ll Eat You Last, playing at Theaterworks in Hartford through August 23rd.  The show, a hit on Broadway, because of the star power of The Divine Bette Midler in the title role, is a one woman production starring Karen Murphy as the foul-mouthed, self-centered and supremely confident Mengers.

Ms. Murphy, as Mengers, sits in her living room overlooking the Hollywood hills and looks back at her life while waiting for a phone call from Ms. Streisand who has just jumped ship to another agency.  While she waits we are given highlights of her personal and professional life in a rambling, bawdy, cigarette and alcoholic fueled, 80 minute, intermission-less monologue.  Ms. Mengers and her family fled Nazi Germany and then, in succession, settled in Utica, New York and the Bronx before beginning her career as a receptionist at the MCA talent agency in New York City.  In a short time she moved to various agencies as a secretary before breaking into the business as a full-fledged agent.

Sue Mengers was a larger-than-life personality and, therefore, the actress playing the role needs to possess the same out-sized traits.  Karen Murphy, while a fine comedic actress (her turn as the tart-tongued General Cartwright in Goodspeed’s recent Guys and Dolls is a good example) is not someone with an imposing, towering and charismatic personality the part needs.  This makes her chronicling and entertaining anecdotes come across as mere stories as opposed to captivating, personally lived moments.

Playwright John Logan has cobbled together a series of humorous, lively and absorbing yarns that keeps our interest, but the production feels like an afterthought in his various writing projects.

Director Don Stephenson keeps Ms. Murphy busy lighting cigarettes, taking frequents hits on a joint, sipping spirits and eating candy, but that’s the extent of their collaboration.  Mostly, she sits on her white couch and delivers off-color accounts from her past and 1960’s-1970’s cultural references.

I’ll Eat You Last, playing through August 23rd.
Posted by StudentAffairs.com at 7:12 AM No comments: