Review of "How to Succeed in Business" 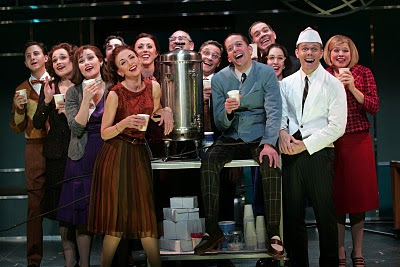 Frank Loesser has penned some of the most memorable and melodic scores in Broadway history, including Where’s Charley, Guys and Dolls, and his 1961 Pulitzer Prize winning gem, How to Succeed in Business Without Really Trying, now receiving a spirited production at the Goodspeed Opera House in East Haddam, CT.

The satirical look at big business centers around J. Pierpont Finch, a window washer who, guided by the precepts in his handy guide, aptly titled "How to Succeed in Business," slowly rises to the top of the corporate ladder. The book of the musical is well-crafted, playful, and spiced with some humorous nostalgic references. 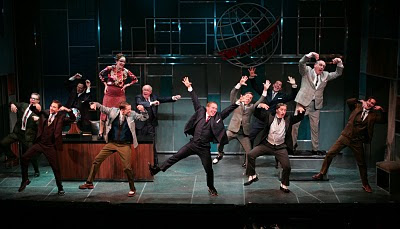 Brian Sears stars as Finch, but lacks the charisma and ingratiating personality necessary for the character to work. This is not to say that Sears is not a talented individual with a solid singing voice, but instead of rooting for him on his meteoric climb to the top there is more a feeling of indifference. The romantic subplot between Sears and Rosemary Pilkington, played with self-assured aplomb by a beautifully appealing Natalie Bradshaw, is listless and lacks any chemistry.

This is truly unfortunate since the entire supporting cast is superb, among them Erin Maguire as the sassy secretary, Smitty; Nicolette Hart as the sexy bombshell, Hedy LaRue; Tom Deckman as the scheming momma’s boy, Bud Frump; and Ronn Carroll as the boisterous president of World Wide Wickets, J.B. Biggley.

Director Greg Ganakas molds the large cast into a cohesive unit, beautifully incorporating Adrian Jones’ multi-functioning set into the flow. Jones’ scenic design deserves a special nod as they evoke a cool 1960’s modernist style that never overpowers the show. My one small complaint deals with the pacing of the production. At times it seemed a half step slow, missing a certain sense of liveliness. 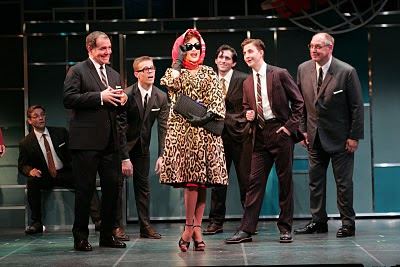 Choreographer Kelli Barclay expertly maximizes the small space of the Goodspeed stage with wonderfully satisfying results. Her added flourishes to “Coffee Break,” for example, are inventive and highly rewarding.

Whatever the shortcomings of How to Succeed, and don’t let me give you the impression that the musical is not first-rate entertainment, there is always the Frank Loesser score where every song is a gem. From the opening notes of the title song to the comical duet of “The Company Way,” the flirtatious “A Secretary is Not a Toy,” the rah rah of “Grand Old Ivy,” Finch’s self-centered and mischievous ode to himself “I Believe in You,” as well as the rousing “Brotherhood of Man," my foot didn’t stop tapping during the entire show.

How to Succeed in Business Without Really Trying, playing at the Goodspeed Opera House through November 28th.
Posted by StudentAffairs.com at 8:50 PM No comments:

I haven’t laughed this hard at a Broadway show for many, many years. The reason—the tour de force performance by Mark Rylance in the revival of David Hirson’s comedy, La Bete. Set in 17th century France, La Bete stars Rylance as Valere, an ill-mannered, self-centered, bumbling fool of a playwright and actor who, due to a royal decree, is thrust upon an in-house troupe of actors, led by highbrow playwright-in-residence, Elomire, played with equal hilarity by David Hyde Pierce. Elomire, to be blunt, despises the vulgar, no-talent Valere which, as the production unfolds, allows Hyde Pierce to unleash an invective tirade against his foe. And no one is better than Hyde Pierce in spewing forth a cascading torrent of insults.

Very shortly, however, Rylance’s Valere stumbles on to the stage where he delivers what is, in essence, a 25-30 minute stream of consciousness monologue that brings down the house. Hyde Pierce and Stephen Ouimette, as friend and colleague, Bejart, are helpless, or is that hapless, prisoners to the verbal somersaults and shenanigans of Rylance’s Valere, attempting throughout his demented discourse to garner a word in edgewise, to very limited success.

This dizzying display of theatrical wordplay and buffoonery sets the stage for the clash between the cultured, and somewhat snobbish, art of Elomire and the more populist appeal of Valere’s malformed creations. An underlying theme Hirson tackles in La Bete is the judgement of artistic worthiness—who is to say what is meritorious or not? In La Bete the anointed arbiter of art is the royal princess, played with regal and brattish delight by UK star Joanna Lumley. She craves the association with Elimore’s more cultivated troupe, but sheepishly enjoys the lowbrow plays of Valere. Through incessant prodding by Elimore the princess agrees to chose between the two.

Director Matthew Warchus once again demonstrates, as he did with recent Broadway comedies God of Carnage and Boeing-Boeing, his deftness and skill in working with a lively cast of characters. He keeps the show percolating. Unfortunately, while La Bete can be painstakingly funny the show’s overall momentum can only be sustained while Rylance is the center of attention with his unceasing blather and simpleminded merriment. There’s no way the comedic intensity that consumes the first 30 minutes of the production can be maintained. That’s not to say the intermission-less production is not entertaining. On the contrary, the show, with David Hyde-Pierce at his side-splitting best, and the rest of the cast game for, well, almost anything, La Bete provides a rollicking good time for theatergoers.
Posted by StudentAffairs.com at 4:40 PM No comments: