Let me state right at the start, the Goodspeed Opera House’s production of Show Boat is one of the best shows I have seen there in recent memory. The Jerome Kern and Oscar Hammerstein II classic radiates with emotional intensity, standout performances, and a celebrated score.

Show Boat, historically, is a large-scale musical. The early 1990’s Broadway revival was a lavish production where the riverboat itself was probably the size of the Goodspeed theater. But director Rob Ruggiero and his creative team have successfully pared down the musical, focusing on the relationships and interactions of the characters as opposed to emphasizing the grandiose spectacle. 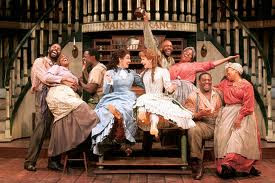 The first act of the sprawling story, based on the Edna Ferber novel, takes place on the Cotton Blossom, the showboat run by Captain Andy. He, his crew, and band of entertainers ply the waters of the Mississippi, bringing dramatic readings and showgirls to the populace up and down the river. In quick succession we are introduced to the central characters—the fatherly Captain Andy; his wife, the stern, no-nonsense Parthy; their young, care-free daughter, Magnolia; the star performers, Steve Baker and his rapturous wife, Julie; the gentlemanly scalawag, Gaylord Ravenal; the squawking, yet talented dance team of Ellie May Chipley and Frank Schultz; and the two African-American boat hands, the deep-voiced, able-bodied, Joe; and his sensible, dignified wife, Queenie. There is young love, racial commentary, treachery, and comedic touches that enliven the action and set the stage for the heartbreaking and poignancy of Act II.

There are so many aspects of the musical to praise, but the first must be the groundbreaking score by Jerome Kern and Oscar Hammerstein II. Kern and Hammerstein were attempting to break free from the light-hearted, operetta mode so entrenched on the American stage. They were looking to add more depth and emotion to their work. With Show Boat they succeeded flawlessly. In Act I alone, we are treated to “Only Make Believe,” “Ol’ Man River,” “Life Upon the Wicked Stage,” and “You are Love.” Act II adds “Why Do I Love You” and “Bill.”

The songs are sung by a highly accomplished cast, all delivering finely polished performances. Let me, unjustly on my part, only single out five, starting with the Captain himself, Lenny Wolpe. His Captain Andy is paternal, supportive, and protective; the glue that holds the production together. He is always the reassuring core when trouble or discord take hold. He is so effortless in his role that you could easily envision Wolpe as the man in charge of a Mississippi riverboat. Lesli Margherita, a radiant and vulnerable Julie, has a dynamic, emotive voice that accentuates her character’s tragic nature. David Aron Damane, as the strapping Joe, sings with power and dignity. Sarah Uriarte Berry, as Magnolia, who metamorphoses from a young, unsophisticated lass to a hardened, world-weary woman, textures her role with impressive range and vitality. Her duets with Ben Davis’ Ravenal are some of the highlights of the production. Davis, the handsome rogue who wins the heart of Magnolia, the daughter of Captain Andy and Parthy, demonstrates a swagger and defiance that makes him both appealing and exasperating at the same time.

As I stated earlier, director Rob Ruggiero has woven together a magical production, no small feat considering the heft and history behind the musical. He assuredly takes the material from the Oscar Hammerstein II libretto and, by coaxing superb performances from the cast, presents an expansive, yet intimate portrayal from the late 1800’s to the early 20th century.

Noah Racey’s choreography, while minimal, develops naturally from the action on stage; the production numbers sprout organically from the storyline. He also gets to showcase the comedic and dancing talents of Jennifer Knox as Ellie May Chipley and Danny Gardner as Frank Schultz. Michael Schweikardt’s scenic design provide just enough substance and artifice for the audience to “Only Make Believe, ” whether on a Mississippi riverboat, a Chicago tenement or nightclub.

Show Boat, coming to life at the Goodspeed Opera House in East Haddam, CT, extended now through September 17th.
Posted by StudentAffairs.com at 8:01 PM No comments: