Review of "The Wolves"

The Wolves, is a unique drama that uses the backdrop of an indoor women’s soccer team to probe the multi-faceted relationships of female teenagers.  The premise is simple.  Nine teens gather to drill and prepare for matches over the course of an unspecified time-period.  The group has grown up together playing at various town and travel team levels.  During their time on stage they workout, banter about silly matters, world politics, sex, friendship and more.  As the show progresses the audience slowly becomes more engrossed in their lives and their unique bond.  We become aware of more serious concerns that are just bubbling under the surface of their small talk and carefree attitude.   Issues such as sexual self-identity, individualism, and adolescent anxiety become apparent.  Death also knocks at their door. 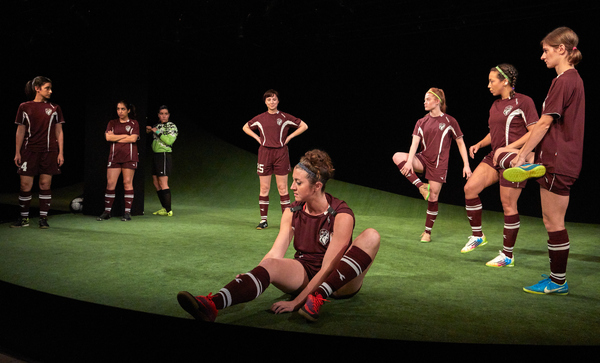 Playwright Sarah DeLappe takes the dynamics that surround the soccer team and has crafted a play full of realism and brio.  At times, raw and full of emotion, the interchanges feel fresh, true, and not forced.  She incorporates overlapping dialogue that adds to the authenticity of the action.  The young woman can be playful, callous, and impudent.   They can shift from being bosom buddies one moment and snapping antagonists the next.  There is a reason the show is named for a predatory animal. 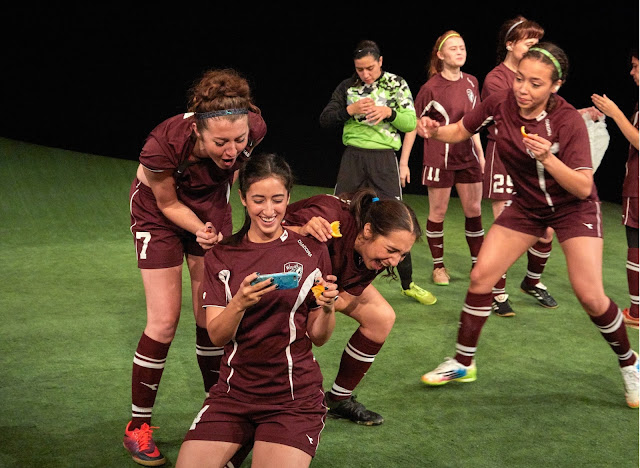 Like a well-trained sports team, the troupe of nine actresses work seamlessly together.  Each member is integral for the success and betterment of the whole.  Throughout the play particular characters will take the spotlight, but then fade back within the assemblage.  The performers have no problem wearing their emotions on their sleeves, which gives the production a realistic feel to it.  There is one adult in the show, Megan Byrne, who appears briefly at the play’s end.  She delivers a heartfelt and penetrating performance.

Director Eric Ort has molded the collection of young performers into a superb ensemble that is drilled and conditioned in soccer basics.  They effortlessly kick the balls to each other, run wind sprints, and talk the talk.  He has forged a group esprit de corps while, at the same time, keeping each member’s individual personality and temperament intact.  He assiduously ensures the dramatic arc of the production remains genuine, slowly ratcheting up the tension as the show nears its end. 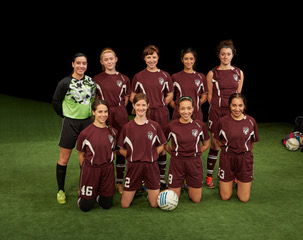 Scenic designer Mariana Sanchez has created a simple, visually striking green artificial turf set that spans the width of the small Theaterworks stage.  Its minimalism and bareness is restrained, but highly effective.

The Wolves, clever and smart, playing through November 10th.
Posted by StudentAffairs.com at 7:43 PM No comments:

Review of "An Enemy of the People"

An Enemy of the People, playwright Henrik Ibsen’s powerful and absorbing drama, is one of the most relevant pieces of theater you will experience this season.  Playing at the Yale Repertory Theatre through October 28th, this 135-year-old play has frightening parallels to the polarizing political forces, both in Connecticut and in Washington, D.C.  It also foreshadows such pulled-from-the-headline catastrophes as the recent Flint, Michigan water crisis and the battle waged by Erin Brockovich over tainted water caused by the Pacific Gas and Electric Company in the early 1990’s.
The plot centers around Dr. Thomas Stockmann (Reg Rogers), a civic-minded physician who discovers the water being piped into the recently completed health spa is toxic.  Thinking his brother (Enrico Colantoni), Mayor Peter Stockmann, will receive the news with gratitude and praise, he is stunned when the disclosure is received with contempt and harshness due, primarily, to the economic harm such a discovery would have on the resort and small Norwegian town.  Maddened by this reception, the physician enlists the support of the liberal-minded newspaper and homeowner’s association, who see this as a way to exploit their own self-serving agendas.  However, with shrewdness and subtle threats the Mayor manages to turn all party’s opinions against the doctor who refuses to put aside his convictions and, subsequently, becomes persona non-grata, an enemy of the people.

Ibsen brings eloquence and preternatural insight into this morality tale of self-righteousness, economic greed and survival.  The term “conjecture,” used time and time again to discredit the doctor’s scientific findings, eerily mirrors the false news claims over climate change within the Trump administration.  It might be stretching matters, but when the playwright speaks of the dangers of the solid majority I couldn’t help but think of the know-it-all Democratic majority within the Connecticut statehouse and their mishandling of the state budget crisis.  What happened in Flint, Michigan could have been a modern-day version of the play.  Paul Walsh’s translation has a contemporary feel full of wit, impassioned speeches and a modicum of comic moments.  Sometimes, passages and monologues can veer towards preachiness but, overall, not so much to adversely affect the brisk pace of the production.
The fine cast is led by Reg Rogers as Dr. Thomas Stockmann.  The actor throws himself into the role with an earnest intensity and oratory prowess.  He thoroughly encapsulates the everyday individual ready to do battle—no matter what the odds--with the forces of injustice and narrowmindedness.  Think Jimmy Stewart in Mr. Smith Goes to Washington.  Enrico Colantoni, as the doctor’s politically entrenched brother, smolders with indignation over other’s slights and disrespect.  Yet he shows caginess and astuteness in his portrayal of the obfuscating official.

Director James Bundy has taken what could have been a tired and venerable play and infused it with a captivating freshness.  The large cast is lively and vigorous under his firm guidance.  The show crackles during many points, but none more than when the two brothers become confrontational.  You can sense both the love and loathing they have for each other.

An Enemy of the People, a timely and penetrating production, playing through October 28th.
Posted by StudentAffairs.com at 2:56 PM No comments:

Review of "I Hate Musicals - The Musical"

I was looking forward to the show I Hate Musicals – the Musical, receiving its world premiere at the Ivoryton Playhouse.  Musical comedies with a screwball premise and off-beat sense of humor are some of my favorite theatrical pleasures.  But  I Hate Musicals, penned by Michael L. Reiss, a veteran writer for television’s The Simpsons, is a disappointment.  The constant barrage of one-liners and extended jokes, more often than not, fall flat or miss their mark.  The overall show is not cohesive, relying too much on extended riffs on everything from the current cupcake craze to the unmelodic songs of Stephen Sondheim.


The show opens with Alvin (Stephen Wallem), a formerly successful TV sitcom writer now dispirited and impoverished, having a meeting with Diane (Amanda Huxtable), the head of comedy development at Alvin’s old network.  She is his old nemesis but, desperate for work and his dignity abandoned, he pitches his idea for a new show, “My Brother, the Pope.”  To say the tete-a-tete goes badly is an understatement, with barbs and invectives flying every which way.  Just as the encounter ends, a horrific earthquake hits Los Angeles sending the stage into darkness.  When the lights go up the once uncluttered and tidy office is a shambles with debris scattered everywhere.  Diane is dead and Alvin is pinned down by a pile of rubble.  As he madly yells for help and dials 911, individuals from his current and past life start appearing, not to mention Jesus, the Devil, Moses, and Sigmund Freud.  Is he dead?  Hallucinating?

Writer Michael  L. Reiss uses Alvin’s untenable predicament as a means to examine his character’s pathetic life.  Like the role of Winnie in playwright Samuel Beckett’s Happy Days, Alvin is haltingly being engulfed in his own disappointing being.
In between visits from those he knows (knew) such as his aged, forgetful agent Lee, (R. Bruce Connelly), he delivers a steady stream of monologues and commentary on such disparate topics as relationships, religion, McDonald’s Big Macs, and the quality of TV programming.  He also manages to skewer serious-minded New York City playwrights and those aspiring to be one.

While there are some humorous segments and situations, the overall production is too inconsistent and fragmented.   The stream of consciousness rants and harangues and skits built around the musical numbers would be more at home at an HBO comedy special rather than in this 90-minute, intermission-less show.

The cast is led by Stephen Wallem as Alvin.  He is a large, affable performer that wears his angst on his sleeve.  We feel the disgust with himself and the world.  The actor possesses a deep sonorous singing voice, which he puts to good use throughout the musical.  R. Bruce Connelly, a Connecticut favorite, infuses the role of Lee, an old-school talent agent, with a drollness and world-weariness that serves up amusing retorts to Alvin’s kvetching.  Amanda Huxtable, playing multiple female parts, gets to create four distinct characters, each serving as a spirited counterpoint to Wallem’s unrestrained dramatics.  Ryan Knowles is enjoyable as an erudite, but thoroughly pompous Professor.  Will Clark puts a unique spin on Jesus and Sam Given, also playing  a variety of roles, seems to have been given the green light for a no-holds- barred performance.  Except for his banal security guard, every other character provides a wild uproarious spark to the show.
The score is comprised of numbers, primarily from well-known songs with rewritten lyrics.  The sole musician, Michael Morris, sits at his piano slightly off-stage (having burst through a wall during the earthquake) and provides skilled accompaniment throughout the production.  You’ll recognize the melodies from “YMCA,” “Hooray for Hollywood,” “I Love L.A.,” “I’m Flying (from Peter Pan), and “Goldfinger.”  There is an extended discourse on the compositions of Stephen Sondheim that would be at home in any of the Forbidden Broadway incarnations.  The songs are presented tongue firmly in cheek.  They provide the most consistently pleasing moments of the musical.

Director James Valletti has crafted some gleeful moments but, by and large, the rhythm of the show is slightly off, which hinders the comical set-ups and deliveries.  The witty and whacky premises are, more often than not, unfulfilled.

I Hate Musicals – The Musical, mildly diverting entertainment, playing at the Ivoryton Playhouse through October 15th.

Posted by StudentAffairs.com at 6:02 AM No comments: