The best part of Lady Day in Emerson’s Bar & Grill, the play with music at Playhouse on Park, are the extended stories the actress Danielle Herbert, as Billie Holiday, relates to the audience.  They are bawdy, full of humor, and provide a window into the troubled personal life of the legendary singer.

The setting for the two-character drama is a rundown bar in Philadelphia, a city we learn she has a love/hate relationship with.  The Scenic and Lighting Design by Johann Fitzpatrick brings out the plainness and shabby nature of the establishment. 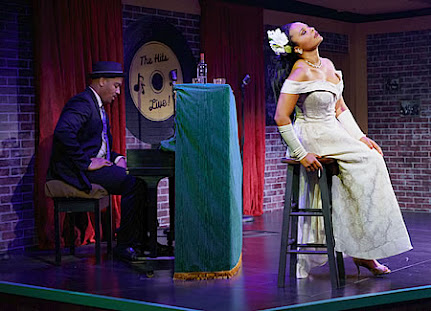 Billie Holiday is at the tail end of her storied career and this is one of her last performances before her death at 44.  Throughout the 90-minute, intermission-less performance, she sings over a dozen songs accompanied by piano player/companion Jimmy Powers ( Nygel D Robinson).  Mr. Robinson, who also does a very good job as Musical Director, is a superb pianist and not always accommodating foil for the singer.  In between the musical selections, there is a continuous stream of off-color, funny, but also, sad banter centering on the relationships with her husbands and mother.  Ms. Holiday smokes and consumes glass after glass of alcohol.  By the end of the show she can barely stand, an intoxicated shell of a once proud and influential jazz singer.

Playwright Lanie Robertson smartly centers his work around the songs associated and beloved by the Billie Holiday.  Most of the dialogue before and after the songs are mere snippets of her pioneering career and rollercoaster life.  The show would have benefitted from more of the lively tales raucously and entertainingly recounted by the performer, such as her story of searching for a women’s bathroom at an all-white, posh restaurant the Artie Shaw band ate at.

The actress Danielle Herbert is first-rate in her characterization of Billie Holiday.  She possesses a marvelous singing voice that conveys Ms. Holiday’s sheer joy for singing as well as the pain she experienced throughout her short life.  The actress’s mannerisms and body language add detail and nuance to the role. 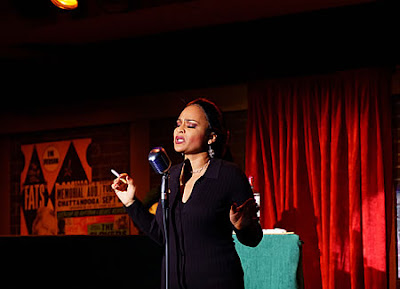 Director Stephanie Pope Lofgren, along with her supporting creative colleagues, has successfully crafted an intimate night-spot, which includes some cabaret seating.  She continuously positions Ms. Holiday around the small staging area, giving the production an openness to what could have been a very static show.  The Director also skillfully injects a balance between the playfulness of the character and her slow disintegration.

Lady Day in Emerson’s Bar & Grill, playing at Playhouse on Park in West Hartford through October 16.  Click here for dates and times of performances.

Posted by StudentAffairs.com at 11:56 AM