Those marvelous dancing feet!  The timeless songs!  Sumptuous costumes!  Superb cast!  Do you get the hint? I thoroughly enjoyed the Goodspeed Opera House’s production of 42nd Street? 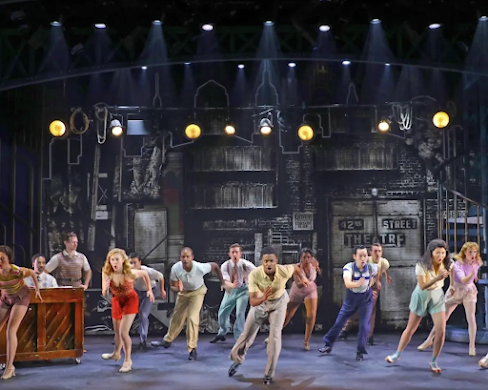 From the opening dance extravaganza, the musical is non-stop entertainment.  The story is simple and straightforward.  Small town girl, Peggy Sawyer, arrives in New York with the goal to star on Broadway.  She is cast as a chorus girl in legendary producer Julian Marsh’s latest show, Pretty Lady, which stars aging diva, Dorothy Brock.  The young performer overcomes a number of hurdles, including nerves, inexperience and, most noticeably, Brock’s dislike for Peggy.  Everything is set for a Broadway success until disaster strikes and the show has to close.  That is unless some talented actress can step in to save the day.  Calling Peggy Sawyer!

The libretto by Michael Stewart and Mark Bramble, based on the 1933 film of the same name, is uncomplicated.  An airy confection.  However, looks can be deceiving. There is an orderly structure to the book that propels the story forward.  There is also more depth to the character than you would think.  Much of that is due to the marvelous cast and skillful direction of Randy Skinner.

In some respects, 42nd Street 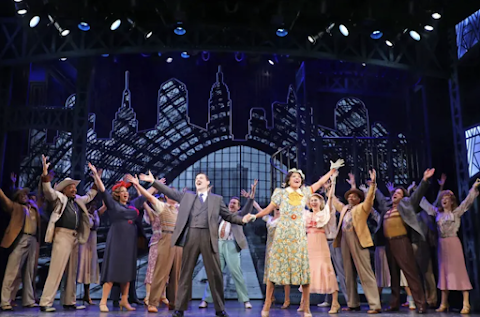 is a jukebox musical with compositions from the veterans Al Dubin and Johnny Mercer and music by Harry Warren.  They are presented with style and verve by Musical Director Adam Souza. The songs, culled from the 1930’s movie, along with other film scores of the era, include such classics as "Go into Your Dance," "You're Getting to Be a Habit with Me," "I Only Have Eyes for You," "We're in the Money," "Sunny Side to Every Situation," "Lullaby of Broadway," "Shuffle Off to Buffalo." and "42nd Street."  In short, you will be humming (just not too loudly) throughout this joyous production.

The cast is an outstanding mix of experienced Broadway performers, stars-in-the-making, and a bevy of tireless dancers.  Kate Baldwin’s Dorothy Brock is imperious and demanding, leading to the audience’s initial dislike of her character.  But the actress provides a more layered performance to stroke our compassions and, ultimately, our admiration.  Ms. Baldwin has numerous opportunities throughout the production to display her beautiful voice.  She’s also not a bad hoofer. Max von Essen brings a quiet intensity to the role of Julian Marsh.  The more understated characterization balances out some of the more (appropriate) over-the-top performances in the musical.   Carina-Kay Louchiey is an effervescent presence on the Goodspeed stage as the starry-eyed Peggy Sawyer.  She is a true triple threat - Ms. Louchiey can dance up a storm, has a gorgeous singing voice and is a talented actress.  Blake Stadnik is a boundless source of energy and radiance as Billy Lawlor, love interest of Peggy Sawyer.  He is a keen dancer and dynamic singer that jumpstarts the show whenever he is on stage.   Lisa Howard, another Broadway stalwart, gives the production a jolt of comic relief as producer Maggie Jones. 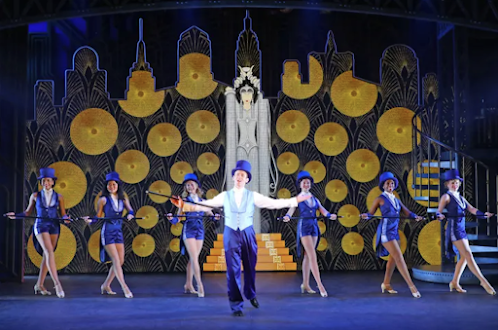 Director/Choreographer Randy Skinner has helmed many productions of 42nd Street and was an assistant to Director/Choreographer Gower Champion in the original 1980 Broadway production of the show.  As choreographer, Mr. Skinner has crafted an outlandish number of virtuoso dance routines, primarily tap, but also featuring an array of other dance styles.  In his Directorial role, he keeps the show fast-paced, creating grand moments that shine over and over.  He effortlessly blends in his choreographic numbers and skillfully melds in all the design elements to form a seamless production.

The Scenic Design by Michael Carnahan is one of the strengths of the musical.  He incorporates traditional sets along with a well-integrated and executed Projection Design by Shawn Duan.  Along with Cory Pattak’s Lighting Design, the various creative components are in perfect visual harmony. The projections, in particular, open up the production allowing, for example, striking street scenes of New York City and a train terminus.


Posted by StudentAffairs.com at 9:33 PM