A Contemporary Theatre of Connecticut’s decision to open their in-person season with Smokey Joe’s Cafe is a smart move.  The show is a buoyant and effervescent jukebox musical, filled with familiar and hummable tunes, highlighting the hits composed by songwriters Jerry Leiber and Mike Stoller.  They include such standards as “Jailhouse Rock,” “Stand By Me,” “Yakety Yak,” “Hound Dog,” and “On Broadway.”

The production features eight smooth, highly skilled, and vocally adept performers who take the stage with a spirited assurance and sparkling agility. 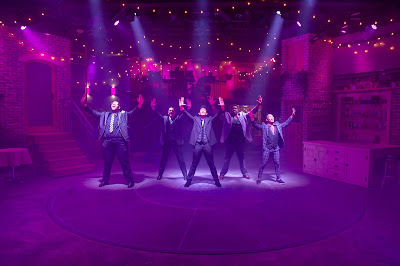 The thoroughly enjoyable and entertaining musical, encompassing over 30 songs from the Leiber and Stoller catalog, is presented as a series of well-crafted mini-vignettes.  They feature soaring solo performances as well as a combination of any number of the actors and actresses.  All of these artists - Albert Guerzon, Arnold Harper II, Avionce Hoyles, Jordan Fife Hunt, Keyonna Knight, Courtney Long, Kelly MacMillan, and Judson Williams - showcase their varied range during individual numbers or in combination with others, whether it’s emoting tenderness or showcasing an energetic flair.

While all of the performers exude a polished confidence and professionalism, two members of the ensemble standout.  Courtney Long has a brashness and self-assured attitude, along with a soaring and powerful vocal range, that had the audience cheering.  Albert Guerzon is engaging, high powered, athletic, and radiates a contagious charisma

First time Director Stephanie Pope Lofgren, who also doubles as choreographer, does an impressive job providing a captivating narrative structure for each song, no small feat when you have so many scenes to create.  She shows creativity and an inventive deftness that never becomes tiresome or repetitious.  As choreographer, Ms. Lofgren augments most songs with pizazz and highly synchronized movements.  She has superbly incorporated Jack Mehler’s lighting design into the production, which adds a stylistic flourish that doesn’t overwhelm any of the musical numbers and helps punctuate the energy and rhythmic flow of the show.

Mehler’s scenic design, a simple set with a stoop on one side, a bar on the right and a moveable staircase center stage, provides enough variety for the multiple scenarios. 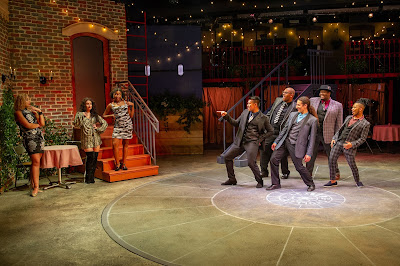 One of the great pleasures of Smokey Joe’s Cafe is John Salutz’s excellent sound design.  Vocals are clear and dynamic, never overwhelming the band or blasting the audience.  Likewise, the seven-person combo never drowns out the singers.

The band is positioned at the back of the stage, some members on an elevated platform in view of the audience, giving the impression of a recording session taking place.  A joy to hear, they are a precision unit, pumping out the music in classic renditions as well as unique arrangements.

Smokey Joe’s Cafe, a first-class production, playing at A Contemporary Theatre of Connecticut in Ridgefield, CT through October 24. Information on tickets as well as theater entry policies are at https://www.actofct.org/.

Posted by StudentAffairs.com at 8:46 PM