The Music Theatre of Connecticut (MTC) has not been shy in reimagining large shows for their intimate performance space.  Their current offering of Sunset Boulevard fits this mold and is a mostly successful and entertaining rendering of the musical. 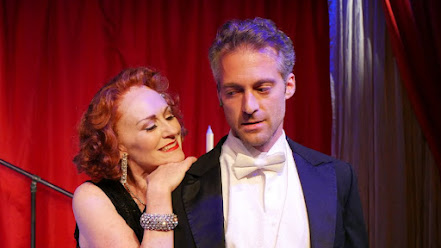 The show, with music by Andrew Lloyd Webber and lyrics by Don Black and Charles Hampton, is based on the classic 1950 film of the same name.  The plot revolves around faded silent movie star, Norma Desmond, and her involvement with a young, disillusioned screenwriter, Joe Gillis.  Through a chance encounter at her large estate, she recruits him to help forge her comeback to the big screen.  The musical has romance, ruminations on the predatory and emasculating Hollywood environment, and a sad and tragic ending.

In order for Sunset Boulevard to succeed on stage, there are four key roles that need to be flawlessly cast.  At the top of the list is the character of Norma Desmond and Elizabeth Ward Land is impressive in the role.  The actress imbues the character with pride, self-importance, and despair.  One moment she is a strong, yet deluded, soul, the next a fragile relic of the past.  Ms. Land possesses a glorious singing voice that both delicately and forcefully takes hold of such iconic numbers as “With One Look,” “The Perfect Year,” and “As If We Never Said Goodbye.” 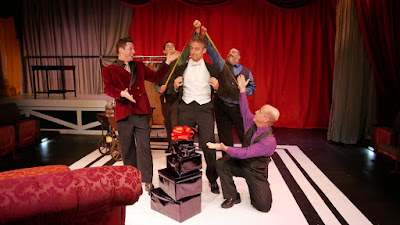 For the other major role of Joe Gillis, MTC has brought in the superb actor, Trevor Martin.  From his first moments on stage, you are taken with his brash attitude and opinionated asides, His desperation is unmistakable as he tries to make it as a screenwriter in Hollywood and straddle the province of Ms Desmond and that of the “real world.”  Both Ms. Land and Mr. Martin infuse their performances with a wide range of facial expressions that enhance their characterizations.

The two important featured players are filled out by James Patterson as Max Von Mayerling, the mostly silent and loyal servant of Norma Desmond; and Sandra Marante as Betty Schafer, the young studio assistant, who collaborates with Joe Gillis in more ways than one.  The composure and self-assurance they bring to their respective roles adds a crucial balance to the two leads and helps to flesh out the storyline, handily adapted by Don Black and Christopher Hampton from the movie screenplay. 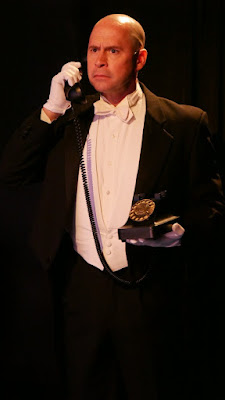 The score by Andrew Lloyd Webber, Don Black, and Charles Hampton is tuneful (see the song list above) and contains bursts of optimism and revelry, but its essence is rooted in the film noir genre of cynicism and darker shadings.  There is the mocking, sarcastic overtones of “Let’s Have Lunch,” where Joe is unceremoniously told by the studio head that his services are not required; “The Greatest Star of All,” where Max solemnly intones the legend of Norma Desmond; to the show’s title number that Joe literally spews forth in a contemptuous diatribe.  All of the songs are brought forth under the capable hands of Musical Director David John Madore.

Director Kevin Connors, an MTC fixture for many years, knows how to make the most of his limited space to give the illusion of a larger production.  He skillfully incorporates the ensemble into a cohesive unit that works to fill out the show.  In the scenes with just Norma Desmond and/or Joe Gillis he sometimes gives the moment an almost cinematic touch.  To paraphrase a famous line from the musical (really, the movie) - “All right, Mr. Connors, I’m ready for my close-up.”

His judicious use of projections adds a spark of creativity without relying on gimmicky theatrics.  I do wish he worked more with Scenic Designer Lindsay Fuori on the overall set to provide more glamor as well as decrepitude.  A couple of curtains and an unadorned, one-level staircase didn’t provide the necessary ambiance for the production. 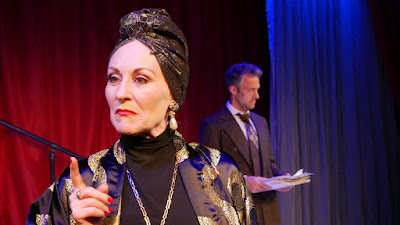 Diane Vanderkroef’s Costume Designs are suitable for the era.  The outfits Jimm Halliday created for the Norma Desmond character are glittering, flashy, and elegant.  RJ Romeo’s black and white projections are well-done and help move the story forward though.  His overall Lighting Design lacks the nuance and complexity of the film noir genre, but his shimmering pool effect is quite impressive.  Will Atkin’s Sound Design is well-balanced, from the vocals to the dialogue.

Sunset Boulevard, a show not often revived on Connecticut stages.  Playing at the Music Theatre of Connecticut through October 2, 2022.  Click here for information on dates, times, and tickets.

Posted by StudentAffairs.com at 8:34 AM