Review of "Anne of Green Gables"

Can lightning strike twice?  Almost 50 years ago, a spunky, redheaded orphan named Annie made her debut at the Goodspeed Opera House before moving to Broadway to become one of the longest running musicals in the history of The Great White Way.  Fast-forward to today and Goodspeed is producing another musical starring a high-spirited, redheaded orphan in their world premiere of Anne of Green Gables.


The show has issues which need to be addressed (more below) before a move to New York can be considered but, overall, it is an entertaining musical that will not disappoint fans of the 1908 novel.  My friend, who accompanied me to opening night, is a lifelong admirer of the source material and she was captivated by the show.  The production has been crafted for today’s sensibilities.  It has the look, feel, and vibe of the musical Spring Awakening, a hit “coming of age rock musical” from 2006.  Unlike that show, Anne of Green Gables is appropriate for children, say 10 and up, but also satisfying for adults.

The musical follows the young Anne Shirley as she arrives at the home of brother and sister, Marilla and Matthew Cuthbert.  As they are getting along in years, they had requested a boy from the orphanage be sent to them to help with running their farm.  Their initial displeasure turns to acceptance and eventually an embracement of the vivacious girl.  Anne is smart, feisty and speaks her mind, not always to her advantage.  Following the storyline of the book, the show traces her life from an inauspicious beginning to her eventual graduation from college.  Along the way, we witness her clashes and struggles with the Cuthberts and the folks of Avonlea on Prince Edward Island.  There are the friendships she makes; her rivalry with the charming, good-looking star student, Gilbert Blythe; and, finally, her growth into a confident and assured young woman.

Book writer Matte O’Brien quickly and effectively sets the tone and direction of the show during Act I.  He handily develops the central characters and the core storyline.  It is fast-paced, coherent, and absorbing.  Act II, however, comes across more of a series of stitched together vignettes.  Scenes can seem confusing, shift hurriedly and are less focused.  There is a more somber tone that overtakes the production as the time frame of Anne’s life becomes more drawn out, characters grow, lives change.  Does this undermine the show?  No, but a reevaluation by Mr. O’Brien and Director Jenn Thompson would help the show find a consistent tenor.

The central characters are fully realized.  We care about their well-being and future.

The cast is led by Juliette Redden as Anne Shirley.  She imbues the lass with strength, fortitude, and a never say never attitude.  She is funny, rude, and a pleasure to watch.  The actress truly embodies the character at all stages of her young life.

As Gilbert Blythe, the actor Pierre Marais is full of self-importance and swagger.  He also deftly brings out a vulnerability and intelligence that presents a more fully developed character seeking his place in life.  As Anne’s best friend, Diana Barry, the lithe Michelle Veintimilla gives a solid performance.  She is lovely, confused, and gracious.  Her character, however, needs better definition.  Initially, she comes across as a simpleton, which is how she is referred to by the townspeople and students at her school.  Yet, by the show’s conclusion she is portrayed as smart and self-assertive.  Which one is it?

Sharon Catherine Brown instills Marilla Cuthbert with a no-nonsense outlook that is layered with regret and love.  D.C. Anderson, as her brother Matthew, may be soft-spoken and a man of little words, but I found him to be the heart of the musical.  I’d like to see his character expanded.  Conversely, even though Aurelia Williams delivers one comedic moment after another as the gossipy, sour puss neighbor, Rachel Lynde, I felt her role could have been reduced.  She gives a marvelous performance, but at the expense of rounding out the characters of Mirella or Matthew.

The music by Matt Vinson and lyrics by Matte O’Brien is one of the strongest attributes of the production.  I haven’t heard such a satisfying score from a new musical in a long time.  The mostly rock-infused score, which also includes influences of folk and country, is tuneful and strongly sung by all the performers.  The songs embody the emotions and dreams of the characters.

The choreography by Jennifer Jancuska is a mixed bag.  When dancing is suitably entwined into a scene, the kinetic movements of the ensemble players are a joy to watch.  Yet, too often, the choreography comes across as separate from the action on stage.  Instead of enhancing, it proves distracting.

Director Jenn Thompson, a well-respected presence on Connecticut stages, has skillfully guided the production to its satisfying end.  She effectively integrates the ensemble into the show, using them to capably inject needed exposition.  Ms. Thompson nimbly teases out the humor and pathos of the work.  As stated earlier, she needs to reexamine the efficacy of the choreography.  Work also needs to be done in Act II to better define some of the intent of certain scenes and the overall flow of the production. 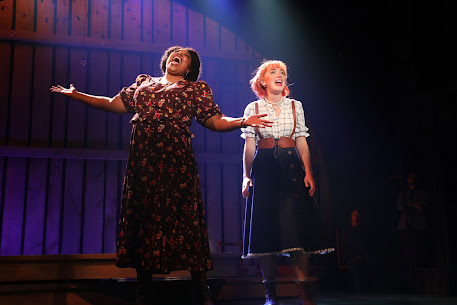 Wilson Chin’s Set Design is minimal, with a revolving platform, center stage, simulating the ebb and flow of the story.  The focus is on the back wall with weathered, floor-to-ceiling wooden planks denoting the barn at the Cuthbert’s farm.  In keeping with the ambiance of the show, Tracy Christensen’s Costume Design incorporates a fine mix of early 20th century sensibilities along with modern garb.  Philip S. Rosenberg’s Lighting Design, while occasionally overstated, breathes life and radiance into the musical.

Anne of Green Gables, an enchanting new musical, well worth a trip to the Goodspeed Opera House.  Playing through September 4, 2022.  Click here for dates, times, and ticket information.

Posted by StudentAffairs.com at 10:53 AM