It’s been 15 years since Nora walked out on her husband and children in Henrik Ibsen’s classic play of self-determination, A Doll’s House.  But, now she’s back in A Doll’s House, Part 2, a sequel as envisioned by playwright Lucas Hnath.   The very talkative play is sporadically funny and thought-provoking as it presents themes on marriage, independence, woman’s rights, and tradition.


The production begins as Nora (Tasha Lawrence) appears at the door she so famously closed.  In a quick conversation with her former housekeeper, Anne Marie (Amelia White), the audience learns all about the last decade and one-half of Nora’s life, her rationale for leaving, and her desires for the future.  She then reveals the real reason for her sudden reappearance, which necessitates what could be a difficult tete-a-tete with her abandoned husband Torvald (Sam Gregory) and his acquiescence on carrying out an important, long-forgotten administrative task.  When the initial exchanges with her still wounded husband fail, Nora attempts to induce the Anne Marie, who has stayed in the household, into her plans as well as the daughter, Emmy (Kira Player), she barely knows.  In the end, the main protagonists are back at the beginning, maybe having a little more understanding between them.
Writer Hnath has constructed a unique work that honors the original while branching out with his own viewpoints.  He expands on the nature of marriage and love, which would have been extremely provocative during the play’s timeframe, but are just as stimulating in today’s world.
While proffering a central character that is exceedingly independent, the playwright has also fashioned Nora as a woman who, ostensibly, runs away when faced with difficulties.  She also looks to others to solve her problems.  In a sense, how independent and forward thinking has she become?
The cast is consistently satisfying, led by Tasha Lawrence as Nora.  The actress, while showing perseverance and commitment to her character’s beliefs, could have given a more layered performance to better gain sympathy from the audience and more effectively show emotion outside her own focus. Sam Greogry gives Torvald a somber, damaged quality.  Still suffering from his wife’s sudden departure all those years ago, he convincingly portrays a man trying to comprehend the changes swirling around him.  Amelia White’s portrayal of the long-time housekeeper, Anne Marie, provides a dash of comic relief as she banters, argues, and tries to fathom the motives of her former mistress.  Ms. White comes across as the most genuine character as she demonstrates compassion and combativeness while seemingly lost in a transforming world.  Kira Player, who plays the daughter, Emmy, is slightly stilted in her performance, but possesses a reserve and stalwartness like her stage mother.

Director Jenn Thompson has a difficult task in conceiving an entertaining production since, even though this is a four person show, throughout nearly all of its 90 minutes, only two characters are on the unadorned stage at one time.  The effect can be like a tiresome 15-round boxing match with “punches” and “counter punches” being thrown, but not the occasional knockdown to liven up the match. There would have been more drama if the character of Nora was more nuanced.  While she comes off as independent, confident, and self-assured her intense self-focus and almost utter lack of empathy becomes wearisome.
Alexander Dodge’s Scenic Design is boxed-shaped and bare bones—a few chairs and an imposing door, center, at the back of the stage.  Along with Philip Rosenberg’s Lighting Design incorporating harsh, fluorescent lights, it is highly effective in its allusion to the caged, trapped nature of the four characters.

A Doll’s House, Part 2, provocative discoursing that is moderately rewarding.
Posted by StudentAffairs.com at 6:08 PM No comments:

Review of "The Engagement Party"

What do friends and family really think about each other? What secrets or private thoughts, once unsheathed, may fracture iron-clad friendships or splinter intimate relationships. That’s the takeaway from The Engagement Party, a gripping world premiere production at Hartford Stage. 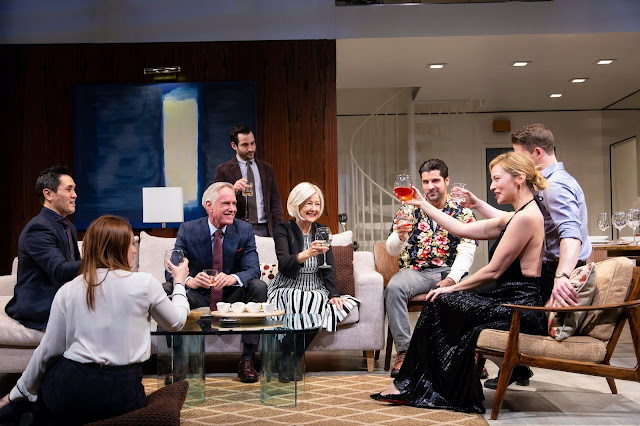 There is gaiety, reminiscing, and a relaxed liveliness to the evening.  Soon, however, cracks begin to appear in the shimmering veneer.  A requested favor, to advance a wife’s career, is flatly denied.  Jealousy over income levels is exposed.  Other tidbits of seemingly unimportant information seep out in conversation.  And then, the simple act of misplacing an engagement ring—valued at $300,000--swiftly ignites the undercurrent of hostility and distrust that has been bubbling under the surface all night long, resulting in a rapid disintegration of civility among the guests and a harrowing secret finally released. 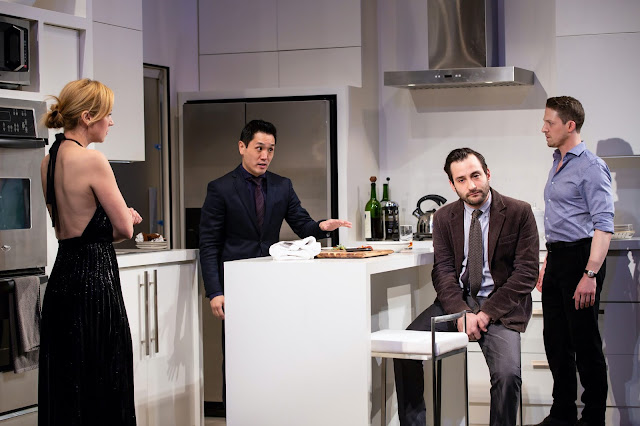 Playwright Samuel Baum has produced a well-written, finely plotted play that is both unsettling and uncomfortable, at times, to watch.  But that makes the production more viewable as its twists and turns keep audience members at the edge of their seats waiting for the next shoe to drop or soul-searching accusation to be made.  His characters are vulnerable, pitiful, and confused.  His gut-wrenching finale is like a punch to the stomach, leaving patrons dazed and in doubt.

The ensemble cast works seamlessly together.  Each actor presents a well-rounded portrayal of their character.

Director Darko Trenjak self-assuredly guides the troupe of performers, starting off the action with a mannered familiarity before he adroitly begins to reveal the cracks and rifts among the characters.  A play like The Engagement Party needs to be shepherded through its paces carefully for maximum impact.  The director, who ends his stint as Artistic Director at the venerable playhouse this summer, achieves these results with blistering effectiveness.

Scenic Designer Alexander Dodge has crafted a modern-looking, sleek, multi-level apartment that is radiantly lit by Lighting Designer Matthew Richards.  While the rotating structure, revealing three distinct sets is the embodiment of sophistication, it’s non-thrust nature creates too much of a divide between audience and performers.

The Engagement Party, a superb work where trust and truthfulness is in short supply.  The 85 minute, intermission-less production plays at Hartford Stage through February 3rd.
Posted by StudentAffairs.com at 6:34 PM No comments:

Review of "The Cher Show"

Almost anyone who has seen The Cher Show, the mildly diverting jukebox musical tracing the highs and lows of the iconic singer and actress, will agree that Stephanie J. Block, who plays the eldest of the talented performers playing the show’s namesake, is sensational.  Sure to receive a Tony nomination for Best Actress in a Musical, this year might finally be Ms. Block’s time.  Can you believe?

The production, like last season’s Summer, the Donna Summer musical, casts three women to play the central character at different points in her life.  There is Babe (Micaela Diamond), the teenage Cher; Lady (Teal Wicks), who portrays the diva at mid-career; and Star (Stephanie J. Block), the older, wiser woman.  Unlike Summer, the trio of actresses in The Cher Show appear in combinations on stage, at many moments all together.  In between and during scenes, they discuss their (her) life, show business choices, celebrate the high moments, and lift each other up when all seems lost and hopeless.

The book by Rick Elice, as with many musicals centered on the works of an artist, is problematic.  How should the musical be structured?  What points in a decades long career should be included and omitted?  The Cher Show combines episodic moments that are perfunctory and informative along with more imaginative and artistically satisfying scenes. The result is a show where the parts are greater than the whole, resulting in a lukewarm mash-up.
The musical covers all the bases you would expect, starting off with Cher’s meeting, marriage, and volatile career with Sonny Bono (Jarrod Spector), with significant emphasis on their television show.  There are her other relationships (Gregg Allman and Rob Camilletti, a.k.a Bagel Boy), singing career, Hollywood phase, setbacks and comebacks.  And, of course, there are the Bob Mackie costumes in all their minimal and sequined glory.  The famous and infamous outfits are paraded throughout the production.

The cast is led by the three actresses that play Cher.  They are engaging, vivacious, and full of passion.  They also possess powerful singing voices.  While Ms. Diamond and Ms. Wicks delivered accomplished performances, it is Ms. Block that truly exudes the star power necessary for the production to succeed at some level.  Her mannerisms, facial expressions, and singing voice are spot on.  But, the seasoned Broadway musical veteran also knows how to deliver a well-rounded, magnetic performance and, here, she makes the audience her own, just like Cher.  Jarrod Spector has Sonny Bono down pat, from his nasal vocalizing to his overachieving drive and his Svengali like control over his wife and partner.  Emily Skinner as Cher’s demanding, but supportive mother, Gloria Holt, makes the most of her time on stage, providing reassuring and compassionate encouragement.
The songs include all Cher’s most well-known songs, including “Dark Lady,” “Gypsies, Tramps and Thieves,” “Believe,” and “If I Could Turn Back Time.”  They are passionately and enthusiastically sung by the cast.

When Director Jason Moore moves away from the straightforward storytelling, The Cher Show, can shine.  This is embodied in the “Dark Lady” production and the wonderfully frivolous move sequence featuring racks and racks of Bob Mackie designs.  The director also manages to bring forth an undercurrent of female empowerment as, but the show’s end, the singer/actress is a more confident, self-directed performer.

Choreographer Christopher Gatteli’s dances are energetic and reminiscent of the numbers you would see on a TV variety show or a Las Vegas extravaganza.

Bob Mackie’s costumes sizzle with their outrageous and whimsical designs.  There’s even one of the more entertaining production numbers centered on his creations.

The Cher Show, a nostalgic diversion for the true fan.
Posted by StudentAffairs.com at 8:19 AM No comments:

Review of "Murder for Two"

Happily, all three are embodied in the very amusing, ingeniously written, and energetically performed two-person show, Murder for Two, playing at Playhouse on Park through February 3rd.

As with many whodunits the story begins in the drawing room of a large, hilltop mansion where the wife of Arthur Whitney, a well-known author, is throwing him a surprise birthday party.  Unfortunately for the book writer when he arrives inside the darkened structure a gun is fired, fatally killing him.  Who fired the fateful shot?  Each of the suspects, played with giddy aplomb by Trevor Dorner, has a solid motive.  Enter would-be detective Marcus Moscowicz, played with equal comic dexterity by John Grieco, who methodically, or maybe more accidentally, happens upon the multitude of clues and red herrings to eventually solve the case.

The two actors have a finely honed chemistry that translates into unbridled zaniness and semi-controlled madness.  Trevor Dorner sometimes seems possessed as he ricochets from one character to another making each one as believable as the next. They include a prima ballerina, the local psychologist, the cranky couple next door, and the wife of the murder victim.  For good measure, he also embodies the officer’s love interest and a boy’s choir of 12.  Well, actually, three (you’ll get the joke by attending a performance).  John Grieco has only one character to focus on but, nonetheless, needs all his comedic acting prowess to stay in sync with his off-center partner.

The score, by Joe Kinosian, who also wrote the amusing and clever book of the show, and Kellen Blair, is quick-witted, inventive, and tuneful.  It would be interesting to hear fully orchestrated versions of each tune.  All the songs are performed by Grieco and Dorner, who also demonstrate their considerable musicianship by accompanying each other on the on-stage piano.

Scenic Designer David Lewis has stuffed the small Playhouse stage with all the accouterments of a gothic manor, giving the set a mysterious ambiance.

Director Kyle Metzger expertly guides the two thespians through the fast-paced production, coming up with enough shtick and sidesplitting shenanigans for two shows.

Murder for Two, imaginative, original, and diabolically funny, playing at Playhouse on Park in West Hartford through February 3rd.
Posted by StudentAffairs.com at 6:49 PM No comments: