Review of "My One and Only" - Goodspeed Opera House

The cover of the program for the Goodspeed Opera House’s first show of the season, My One and Only, says it all – “A Tap Dance SPECTACULAR!” For aficionados of tap the musical, which consists of an all-Gershwin score, is a dream come true. Within the first five minutes the cast is hoofing it up with a sweeping production number on the small stage. 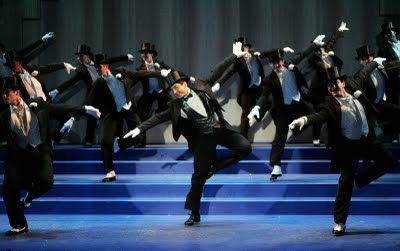 The show, a 1983 hit on Broadway for Tommy Tune and his friend, Twiggy, is a variation of the old standby of boy meets girl, boy loses girl and, in the end, boy gets girl. Billy Chandler, played with sprightliness and vigor by Tony Yazbeck, an aviator looking for fame and fortune by being the first pilot to fly solo across the Atlantic Ocean, glimpses bathing beauty and English Channel crosser, Edythe Herbert, and his heart goes a thumping. Throw in her controlling Russian promoter, political intrigue, a salty female mechanic and even the Arabian nights, and you have the loopy, frivolous plot, crafted by Peter Stone and Timothy S. Mayer, for My One and Only.

The storyline is not the reason for sashaying to East Haddam, CT, home of the Goodspeed Opera House. There are two more important motivations—the songs and the dancing. As mentioned before, the creators of the musical incorporate a slew of George and Ira Gershwin classics into the score. They include “High Hat,” “’S Wonderful,” “Strike Up the Band,” “Funny Face,” and the title number. They are delivered with polish and exuberance. Add the spirited dance routines choreographed with grace and abandon by Kelli Barclay, and you have all the ingredients for a buoyant and carefree theatrical experience. 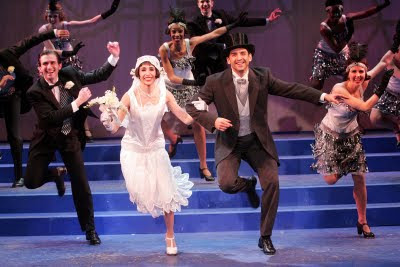 One new feature of the production is the incorporation of a projection system, which heightens the realism and playfulness of the backdrops for the show. While affording the musical to go beyond the normal props and scenery, let’s hope the technology is used accordingly in subsequent offerings and does not take away the intimacy and charm, hallmarks of the Opera House.

Tony Yazbeck as the flying ace, Billy Chandler, is more country boy hayseed as opposed to the formal elegance of Tommy Tune’s original.
His “aw shucks” demeanor works well within the framework of this production. What really matters, though, is he’s a tap dancing whirlwind with a fine singing voice and strong stage presence. Gabrielle Ruiz, as his love interest, Edythe Herbert, is too aloof in her role and she and Yazbeck have little chemistry as a couple. Kirsten Wyatt, as the aviator mechanic, Mickey, is the requisite comic foil, even though some of her lines and antics were a bit over-the-top. Alde Lewis, Jr., as the proprietor of Mr. Magix’ Emporial, while a lowkey presence during his scenes, primarily seated in a barber chair, is a proficient dancer. His singing and dancing with Tony Yazbeck during the Gershwin classic, “My One and Only,” was the highlight of the show. 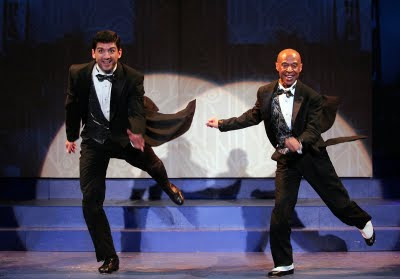 Director Ray Roderick takes all the components of the musical, shakes well, and pours out a tuneful, dancing extravaganza that is sure to be a crowd pleaser during the first part of the summer. My One and Only, now through June 25th at the Goodspeed Opera House in East Haddam, CT.
Posted by StudentAffairs.com at 1:50 PM No comments:

Every so often there are topics I want to address That I can’t impart within 140 characters on my Twitter account, but are too short for a full blog entry. Therefore, my inaugural Bit Parts, which will be an amalgamation of shorter musings.

Posted by StudentAffairs.com at 7:04 PM No comments:

There was a lovefest the other night at the Bushnell Center for the Performing Arts where Idina Menzel made a stop on her cross-country concert tour. As soon as the Broadway and television star entered center stage, fronting the Hartford Symphony Orchestra, the audience erupted in applause and adoration. A Tony Award winning actress for Wicked, Menzel has gained greater popularity for her appearances on the television show Glee. Leveraging this populous fame, the newly minted Dr. Menzel (having received an honorary doctorate earlier in the day from C.W. Post University) has embarked on her current concert schedule.

The intermission-less, one and one-half hour program included just over one dozen songs (not including the compositions she sang about her son, Walker), which I found to be slightly unfulfilling. There could have been less of the cute, sometimes self-deprecating and rambling, banter between numbers and more selections that featured her powerful, soaring soprano. Hearing the Long Island native live was truly an enthralling and entertaining experience. There are few performers, nowadays, that can captivate an audience singing a cappella in such a large venue (as she did with “For Good” from Wicked), belt one to the rafters (“Don’t Rain on My Parade” from Funny Girl), or tenderly wrap a ballad together as she demonstrated with “Love for Sale” by Cole Porter.

The collection of songs mixed Broadway (“Look to the Rainbow” from Finian’s Rainbow and a number of songs from Wicked), pop (“Roxanne” by The Police and “Poker Face” from Lady Gaga) to her originally penned song, “Gorgeous.”

While I would have preferred more singing from Ms. Menzel, I did find her very open with a cheerful, playful personality. You could tell she was honestly happy to be performing for all the fans in attendance. Her heartfelt love to the audience was reciprocated many times over during the evening performance.

The Hartford Symphony Orchestra was a magnificent back-up to the singer. Their full, lush sound provided a thrilling complement to the vocal theatrics of Ms. Menzel. Let’s hope she keeps Hartford in mind for future visits.
Posted by StudentAffairs.com at 2:15 PM No comments:

The Tony nominations are out and everyone seems to have an opinion. Including myself. Here are my musings, mostly about the musical nominees since I’ve been able to see most of them. So, in no particular order:

The last comment/question is will The Book of Mormon, with 14 nominations, break or tie The Producers for most Tonys (they won 12)? It will be tough, but even though there could be significant competition from The Scottsboro Boys, Tony voters like to go with a winner and The Book of Mormon is most certainly a bona fide winner. We’ll have to wait until Sunday, June 12th at 8pm to find out.
Posted by StudentAffairs.com at 2:00 PM No comments:

Sister Act, the new musical based on the movie of the same name, can be viewed as two different musicals. When the action takes place in the convent, Sister Act is a spirited, lively and entertaining Broadway musical. But outside the cloistered walls of the church, the production languishes in plot exposition, matter-of-fact performances, and underwhelming songs. Obviously, when the show is under the guidance and protection of the Lord, Sister Act is a rollicking good time but, unfortunately, you can’t build a successful musical with half the goods.

The general plot follows the movie storyline as would-be disco diva, Deloris Van Cartier (Patina Miller) witnesses a gangland slaying by her sleazy mobster boyfriend, Curtis Jackson, (Kingsley Leggs). Seeking protection from the police, she encounters officer Eddie Souther (Chester Gregory) who just happens to be a high school classmate that also, conveniently, had a huge crush on the threatened woman in his younger days. He whisks her away to a local convent to keep her out-of-sight and safe. At the convent a clash of cultures occur, primarily, between the exuberant and feisty Deloris and the dignified and restrained Mother Superior (divinely played by Victoria Clark).

Van Cartier, told to keep a low profile, instead takes over the solemn, but rather pathetic, church choir turning it into a heavenly sensation. They become a media darling which, or course, leads the bad guys to the convent where, after a brief, chaotic chase through the hollowed grounds, the gangsters are caught and a happy ending prevails.

The main reason to see Sister Act is Patina Miller. She plays Van Cartier with dynamism and gusto. Her powerful voice energizes the stage and shakes the very foundation of Klara Zieglerova’s beautifully conceived and sometimes whimsical sets of the inner sanctums of the church. Miller’s scenes with the gaggle of cloistered nuns provide a continuous humorous thread throughout the production. Standouts among them include Sarah Bolt, Marla Mindelle, and Audrie Neenan. Victoria Clark, as the Mother Superior, gives a more measured performance. However, this allows the actress to deadpan her way through the musical, showing great comic timing with her slow burns and double takes and entendres. Chester Gregory is laid back as policeman “Sweaty” Eddie Souther. While sometimes too nonchalant in his role, he does have a fine voice and some good dance moves.

The music from composer Alan Menken and lyricist Glenn Slater mirrors the show itself. While in the convent the score pulsates with high-octane and disco-inflected numbers such as “Raise Your Voice,” and “Sunday Morning Fever.” Otherwise, the songs are more routine and conventional.

The original book for the pre-Broadway productions of Sister Act, including the London run, was by television writers, Cheri and Bill Steinkellner, but the current version is now attributed more to Douglas Carter Beane. Regardless of who takes credit for what, the libretto for the show is perfunctory with flashes of playfulness and amusement.

Director Jerry Zak has done better work previously. He does demonstrate his comedic flair while, surprise, surprise, we are in the confines of the church, but outside the prying eyes of the lord the production limps along until we are back on holy ground.

Sister Act, like many new musicals this year, a big fat average.
Posted by StudentAffairs.com at 5:17 PM No comments: