City of Angels, the last show of the Goodspeed Opera House’s season, is probably one of the most acclaimed, award-laden musicals that people have never heard of. The show ran for almost 900 performances on Broadway and won a slew of the major 1990 Tony Awards including Best Musical, Best Score, Best Book, and Best Actor, but this infrequently revived hit rarely registers with all but the most ardent of Broadway fans. The production, a more contemporary offering then what is usually in the Goodspeed line-up, is a lively, sexy, well-crafted musical comedy with just one annoying feature (more on that later). 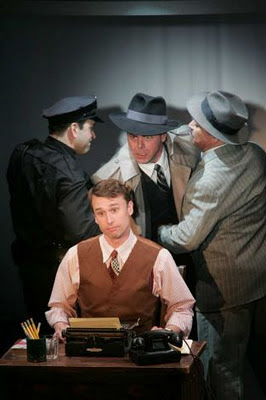 City of Angels is a show within a show. The plot centers around author, Stine, played with winning nimbleness and intelligence by D.B. Bonds, who is trying to craft his murder mystery into a screenplay. While Stine writes his characters come to life as a film noir feature, from the 1940’s, giving us two simultaneous plot lines. During this process Stine also has to deal with the interfering, self-important producer-director, Buddy Fidler, played with narcissistic splendor by Jay Russell; marital woes; infidelity; and his own moral values.

Stine’s alter ego, Stone, a hard-boiled private detective right out of central casting, is played to perfection by Burke Moses. He’s headstrong, obstinate, and the embodiment of every Dashiell Hammett or Mickey Spillane protagonist. Nancy Anderson, in the dual role of Oolie (Stone’s girl Friday from the movie storyline) and Donna (Buddy Fidler’s flirtatious assistant) is marvelous shifting back and forth between the sensual (Donna) and repressed (Oolie). While these three cast members standout, as usual at Goodspeed, all the actors in the show are first-rate.

The story goes back and forth between the real and the not-so-real culminating in a satisfying conclusion for both.

There are a number of reasons that elevate City of Angels to such a gratifying level. First is Larry Gelbart’s well-conceived, well-written book for the show. It’s smart, funny, and sophisticated without being pretentious or overly complicated. The score by Cy Coleman, according to Josh Ritter, the Education and Library Director for Goodspeed, is the first hit musical to feature a full-blown jazz score. While I’m not a jazz aficionado I found the music by Coleman and the lyrics by David Zippel to contain breezy, well-crafted songs that play well in the parallel settings.

Director Darko Tresnjak keeps the show fast-paced which is quite an accomplishment considering there are 40 scenes throughout the production, some short, others more extended. Either way he guides the musical with a steady, creative hand. 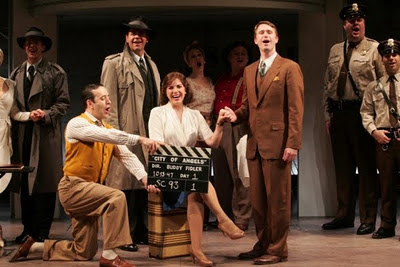 One of the hallmarks of a Goodspeed show is the scenic design for such a small performance space and David Gordon doesn’t disappoint. He uses the raising and lowering of multi-length venetian blinds to reveal the action on stage. The simple, unadorned sets allow for quick scene changes as well as providing the atmospheric motif for the dual setting.

My one annoyance with the production is its overuse of projections beamed on-stage. Goodspeed purchased a system this year and, while its use in the Opera House’s first musical of the year, My One and Only, was appropriate here Shawn Boyle’s projection design have gone overboard. For example, do we really need feet with toe tags projected on the side of the stage during the morgue scene? As I mentioned earlier, the Goodspeed Opera House’s hallmark is its clean, streamlined sense of scenic style. When projections are overly emphasized they become the focus. Do we really want patrons exiting the theater talking about this aspect of the show? If projections are part of the future, I hope their use is more moderated.

Nonetheless, City of Angels is clever, witty and flirtatious fun. The Goodspeed Opera House should be applauded for reviving such a rarely seen work. Now through November 27th.
Posted by StudentAffairs.com at 12:44 PM 1 comment:

The Broadway smash and worldwide touring sensation, Jersey Boys, makes a triumphant return to the Bushnell Auditorium. The musical, for those not familiar with the production, traces the formation and rise to the top of the charts of the Rock and Roll Hall of Fame group, The Four Seasons (only after three of the four original members left did the group become known as Frankie Valli and the Four Seasons).

During its first visit to Hartford, two years ago, I felt the show lacked cohesion as the actors were more caricatures—over emphasizing their rough and tough Jersey roots (and accents)--then portraying real characters. This time around the musical is like a tight, well-rehearsed horn section—full of punch and self-assurance.

The first part of the show builds slowly as characters are introduced, plot lines set-up. However, it’s not until just over halfway through Act I does Jersey Boys begin to hit its stride as the group rockets up the charts with back-to-back-to-back number one hits. The songs encompass the best of the Four Seasons songbook including “Sherry,” “Big Girls Don’t Cry,” “Walk Like a Man,” “Can’t Take My Eyes Off You,” “Rag Doll,” and many more.

The four stars—Preston Truman Boyd as singer/songwriter, Bob Gaudio; Michael Lomenda as the idiosyncratic, Nick Massi; John Gardiner as the coarse, loudmouth, and self-appointed leader of the group, Tommy DeVito; and Joseph Leo Bwarie, as the diminutive lead singer, Frankie Valli—breathe life into their real-life counterparts. Bwarie, especially, has matured into the role of Frankie Valli. He has played the lead singer for a number of years, but this time around he his portrayal is more nuanced and forthright.

The book by Marshall Brickman and Rick Elice cover a lot of historical ground which, especially in Act II, feels more like a greatest hits collection of the group’s lives as one major event after another is displayed on stage. Still, they handle their assignment deftly, hitting the highs and lows of each member focusing primarily on Frankie Valli after intermission as he steps out to lead a reconfigured Four Seasons.

Director Des McAnuff keeps the show moving briskly from one scene to the next with skillful and self-assured hands. He knows how to pace the production between the peaks and valleys of the storyline, resulting in a satisfying theatrical experience.

Jersey Boys, now at the Bushnell Center for the Performing Arts through November 6th.
Posted by StudentAffairs.com at 4:47 PM No comments: