The legend of King Arthur and his Knights of the Roundtable come alive in a stark, yet rewarding production of the Alan Jay Lerner and Frederick Loewe classic, Camelot, at the Goodspeed Opera House in East Haddam, CT. Like its stripped down, and wholly satisfying production of Sweeney Todd a few years back, Goodspeed’s Camelot pares down the large-scale production values associated with the show without sacrificing any quality. In some ways, the musical is enhanced. The minimal sets—sliding screens here, a hanging tapestry there—the lavish costumes, and few essential props allow the audience to focus on the essence of the show—the vivid, yet doomed relationship between the three central characters—King Arthur, Lancelot, and Lady Guenevere. 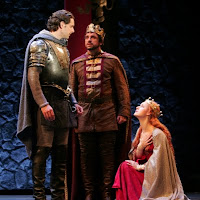 The impressive triumvirate are captivating performers. Bradley Dean as the questioning and principled King Arthur; Maxine de Toledo as the self-centered, yet loyal knight, Lancelot; and Erin Davie as the strong-willed and vibrant Lady Guenevere have an effervescent presence on stage, especially Davie who soon becomes the central focus of a romantic triangle between Arthur and Lancelot. Each of the three actors are accomplished singers, texturing their songs with gaiety and pathos.

Camelot starts out slowly and a bit askew due to Alan Jay Lerner’s attempts at condensing the source material for the show, T.H. White’s novel, The Once and Future King, but gains its footing quickly by Scene Two of the first Act. Director Rob Ruggiero ratchets up the drama and tension between the three leads culminating in a subdued, but sexually charged bedchamber scene towards the end of the musical when Lancelot is caught in Lady Guenevere’s room by the scheming Modred. Ruggerio effortlessly keeps the action moving through the almost three-hour production providing ample opportunity for levity—courtesy of Ronn Carroll’s turn as the aged King Pellinore—and treachery via Adam Shonkwiler’s devious portrayal of Modred.

The Lerner and Loewe score contains a number of gems, though not of the quality of their previous Broadway musical, My Fair Lady. Within the first fifteen minutes we are treated to Bradley Dean’s King Arthur singing, as opposed to the talk-singing epitomized by Richard Burton in the original Broadway cast, “I Wonder What the King is Doing Tonight;” Erin Davie’s saucy, “The Simple Joys of Maidenhood;” and both Dean and Davie with a spirited rendition of the title song, “Camelot.” We also have, later in the show, Maxine de Toledo’s Lancelot giving us a comic, “C’est Moi,” and a sultry, “If Ever I Would Leave You.” Second tier Lerner and Loewe is still a cut above most recent Broadway fare.

Camelot, creating that “one brief shining moment,” at the Goodspeed Opera House through September 19th.
Posted by StudentAffairs.com at 7:11 PM No comments: